One of the stipulations of being on the Muldrow Glacier patrol was also to assist with tearing down the 7,000+ lbs of tents, food and supplied stored and used by the National Park Service at 14,000′ on the West Buttress route of Denali. This usually takes place every year in the second week of July and involves packing the camp into helicopter netloads, and flying the loads off using the A-Star helicopter taking ~500lbs per trip. My first patrol in 2009 (in which I was able to visit the South summit of the mountain), was conducted expressly to complete this purpose, so the task was not new to me. 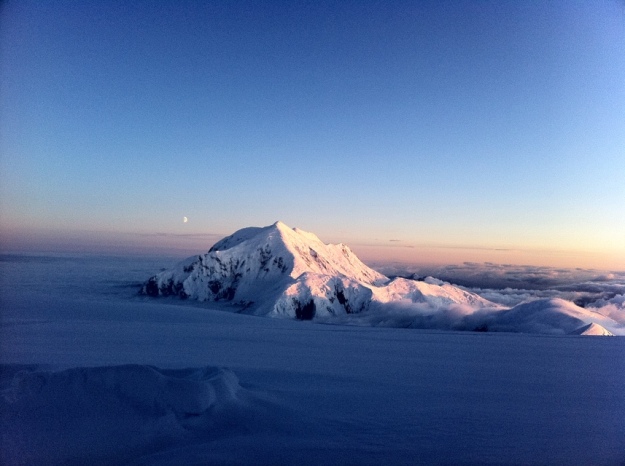 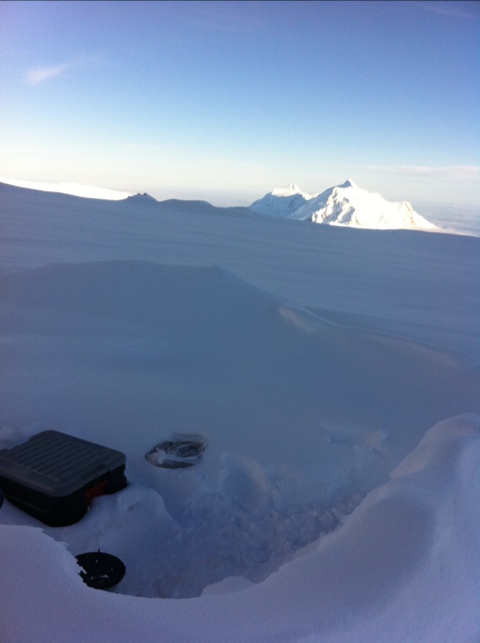 The best pooper view in the world?

July 8 myself and three others descended to the 14,000′ camp to begin teardown and meet another NPS patrol- two others stayed high to return to the south summit on July 9 as the good weather was sticking around. In hindsight, this left quite a bit more work for some of us down low. The Park Service often has a hard time figuring out when when and how to schedule and stage these loads, so teardown can be a cat and mouse game between the rangers on the ground, the weather, and helicopter availability. We pulled into camp, and the park administration immediately called wondering if we had loads ready to fly.

The next few days were lost in a blur of furious activity. The rest of our team arrived at 14 and we put our backs into getting things packed tight. The weather unfortunately, rewarded our efforts with a whiteout and unfliable conditions for 3 straight days. With loads rigged and ready, we were stuck until we could fly loads. Most volunteers had flights on the 14 and 15, so the evening of July 12, one ranger and 7 volunteers left on ski/snowshoe to walk to basecamp and fly out, while one ranger, myself, and 2 other volunteers with looser time commitments stayed behind to finish packing and fly loads once the weather broke. We knew we still had a lot of work to do, but it was a hurry up and wait situation, with 7 folks not being able to wait any longer. The 8 folks walking down had their own adventure in the horrendous conditions of the lower glacier- multiple cravasse falls, whiteout, and slogfest conditions were reported. 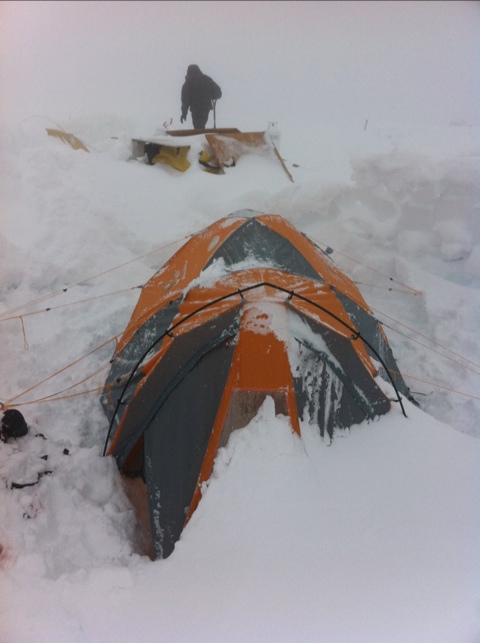 Just a little snow on the tent to shut down helicopter operations.

The morning of July 13, the clouds broke clear and we got word the helicopter was finally inbound. Starting around 9am, we sprinted to make the final arrangements, and fly off 15 helicopter net loads before the weather closed in. Not quite enough. We sat with 2 loads to go plus one trip for ourselves, and debated sitting on the mountain for another few days with minimal food and fuel, four guys to a tent. Around 7pm, things cleared up just enough to get the last loads, and ourselves, off the mountain. We felt a little like heros, but mostly we just felt worked- physical labor at 14k will drain you. We flew back to Talkeetna on the last flight and landed back in town around 9pm, just in time for last call at the West Rib. There was much celebration, and a nail biting finish to an outstanding expedition.

Thanks to Dave, Tom, and Minu for working like machines to get it done at the last minute. Thanks to Chris for bringing me on patrol in the first place. Thanks to Josh, Drew, and Bob for their unlimited encouragement and partnership. Thanks to Andy and Rico for the ride home. Thanks to Amanda, Margaret, and Michael for making Alaska feel like home away from home. Thanks to all of you for sharing the adventure with me, I’ll post more photos as I sort through them.

Minu and I, on the commute home after a hard days work...