I haven’t been avoiding this post, but recently I’ve gotten a number of very supportive and encouraging emails and it occurs to me that I haven’t shared enough of the small but awesome things that have happened so far on this trip. Happily, this is quite a long post. Surprisingly I’m feeling stellar after a long day in the saddle tackling northern Ecuador. Today had some of everything, and I honestly wasn’t sure I’d make the destination I had targeted, but I did and having exited Colombia it is an appropriate time to share some of the awesome stuff that happened while I’ve been on the road:

(Southern Colombia is beautiful…)
-Bicycling is a regular part of rural life here (unlike in the USA) and I’ve seen workers of all sorts making their living getting around long rural distances by bicycle. Like the guy who had to take a full sized machete to work, so he stuck it in the back of his pants and got in the saddle (not the guy who chased me off his land).
-I mentioned Barry and Carol Smith (the retired aussie overlanders that rehydrated me in the desert). We ran into each other at random 400km later in the streets of downtown Pasto, and again on the highway to Ipiales. So fun that they decided not to buy a McMansion and play golf. They are getting out and after it, something to aspire to when I’m old.
-In the desert I met a guy named Jose, a Bogotan bike tourist, and despite the fact he spoke no English (and my spanish was worse then than it is now…), we stopped for a 20 minute conversation. He was riding a nice looking Giant-brand road bike with all his kit in a worn leather backpack and was just coming home from almost 6,000km.
-I mentioned my friend Perly who hosted me in Neiva. We stayed up late sharing favorite music and movies on YouTube, but one of the most insightful moments of the trip was when Perly recommended we watch “the Story of Stuff”. If you haven’t seen it, click the link- if you have, think about watching it with someone who lives in a place who’s resources have already been extracted as described in the video.
-Sitting with the crippled guys in the gigante square eating chips and talking. I mentioned them earlier, but it is still one of my favorite spots and favorite moments so far.

(The helmet mirror is totally the hit)
-In the same town as the crippled guys, I rolled in for lunch feeling hot and worked. The restaurant owner made me feel like a celebrity and wanted all the details of my trip. I couldn’t have felt more welcome.
-Although I don’t recommend the experience I am now accustomed to the reason roosters get the traditional rap for waking up the farm. In San Agustin, there were 3 or 4 that made sure everyone was up well in time for work. It’s one of those things that is so annoying it is hilarious, to wake up to the sound of many, many roosters.
-Later that day in San Agustin, I went to my first true South American market experience. I bargained, I people-watched, and drank many cups of Tinto (the local coffee of choice) with the locals.
-I went out to the archeological park in San Agustin to see the many ancient statues there. On my way in a 50-something woman asked if I wanted to buy a guided tour in English. Usually I skip these things, but she dropped her price and my gut said “take it.”. Seven hours later my new friend Miriam and I were discussing organic farming, community awareness, and animals rights. I’m awfully glad she didn’t back down when I blew her off in the first place. It made my day and completely changed my experience of San Agustin.

(Miriam, at the headwaters of the Rio Magdelena)
-I woke up yesterday morning and started riding out of Pasto only to be greeted with a steep 10km climb straight out of the city, also known as a smack in the face. Fortunately, approximately half the male population of Pasto was out doing the same ride so I had lots of company. I gutted it out and got to the top of the pass. Predictably there were several spots for breakfast and Luis was particularly impressed with my effort on such a heavy bike (he tried to pick it up out of curiousity). He immediately ordered breakfast for the two of us and in broken bits of both languages we forged a friendship. He is in his 60s but used to be a local champion rider. He was stoked on my trip, and insisted on buying my breakfast. It kicked the day off right. Also interesting to note that Pasto was the first place I’ve seen a prominent fitness culture here- lots of people out running, cycling, and playing field sports. I found it strange not to see this sooner. 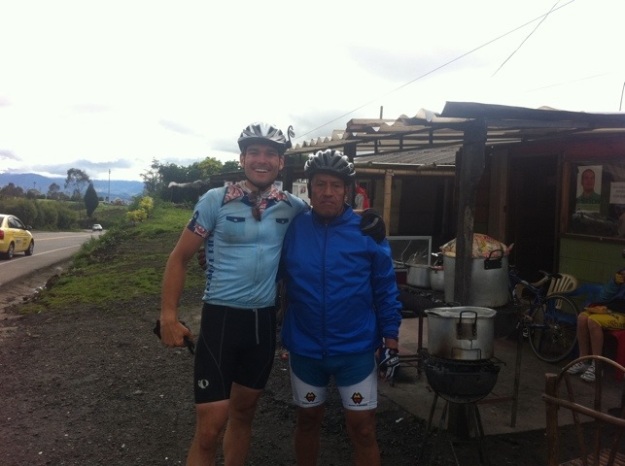 (Breakfast with Luis, the older guys always know what’s up)
-Later in the same day I was rolling into Ipiales, a gritty border town I had been warned to watch my back in. Just outside the city I saw a gathering of what I learned was the Ipiales Cycling Club. They cheered me as I passed by- I needed to find a decent hotel and suddenly I knew just who to ask. I turned around and rode back to them, and no sooner did I put my foot down than they crowded around with questions, handed me a beer, and started posing for photographs. I walked away with both a hotel recommendation and a Ipiales Cycling Club wind jacket (that doesn’t fit, but that I am supposed to carry all the way to patagonia…).

(Amazing lunch for $2.50 in Ipiales, which I really think is quite a fine place)
-and today, when I thought my legs were beat, I got to cross an international border on a bicycle, cycle through some of the most beautiful country yet, and take lots of breaks so I could get to where I needed to be, however unlikely it seemed at first.

(Ready for another stellar day, this morning) 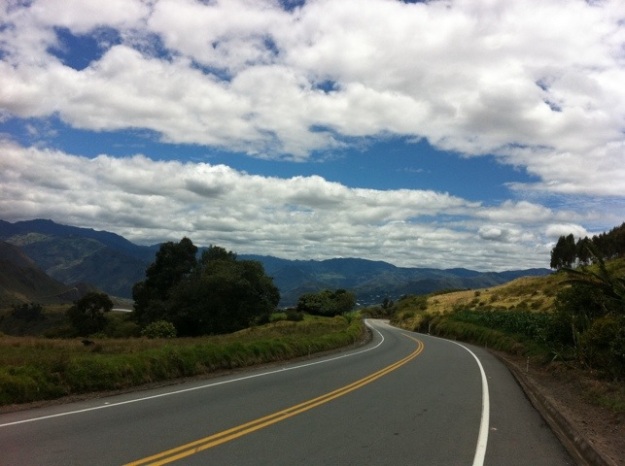 (Clean roads and big skies on my first day in Ecuador)
So yeah, in case you were wondering, I think I’m finding my groove in this thing. I’m psyched for tomorrow, and all the next best pieces.

2 thoughts on “The Good Parts”