It’s what we say when we get up at 2am, hike for 8 hours with a pack full of ice climbing gear on our backs, and get back to the car without really climbing anything. My friend Chris called me last Sunday and proposed we climb the North Face route on Mt. Hood this morning. Word on the street was that climbing conditions were good and the weather looked solid. The North Face has been on my climbing ticklist since I started ice climbing 2 years ago, and it seemed like I could just squeeze it in between driving back from San Jose and going to Montana. The route doesn’t come “in” very often, and the chance to do it with one of the most influential climbers in my life was prime. We geared up at Chris’ place last night and drove up to the mountain.

(The alpine toys getting ready to roll)
There is a hut to use at the trailhead and we rolled in to grab a few hours sleep before starting to climb. The plan was to get up at 2am, pound a quick breakfast and make the hike to be at the base of the route just as daylight illuminated the hard parts.

(Awesome sunrise colors)
I hadn’t been in the area around the climb in 2 years, and Chris hadn’t been in 3. I thought I remembered the approach being “straightforwards” and the friends I mentioned our plans to had not asked whether I had the beta or not. I thought the plan was simple: hike the hill, descend onto the glacier, don’t fall in any cravasses, and climb the route with impeccable speed and style.

Instead, we took the tools for a walk. Without daylight or any moonlight at all, we had trouble finding a workable route down to the glacier, and then missed the critical ramp on the left side of the glacier. Instead we climbed the gentle line in the center of the glacier and found ourselves in the middle of the icefall in the dark. Both Chris and I had limited time to do the climb, and we knew when daylight hit we would be racing melting conditions to finish the route ahead of ice and rocks falling down the route. By the time daylight hit and we figured out where we should have gone, we knew we were too late to finish the route.

(So close, yet so far. Not this time my friends.)
We finished the hike up to the base of the route anyway just to scope out the rest of the approach and look at the route. Oddly enough, when we got there it was t clear what we were supposed to climb. The majority of the route looked like great neve, but the first pitch seemed to be missing. To get on the route we were either headed up a thin mixed line (we had no rock pro) of marginal quality, or facing a 100′ overhanging ice cliff. Not that we knew what it was going to look like but neither option seemed appropriate forthe route description. Despite our navigational failure, both of us were curious as to whether the route was actually as “in” as we had heard. It was not inspiring, and being 2 hours behind schedule meant that our fate was sure, we were headed down.

(Bergschrund trouble.)
All that said, it was a beautiful day out with a great friend and climber, I wouldn’t have missed it. We all screw up the approach sometimes, and now I’ve got one more piece of experience. The route will still be there next year, and at least the tools got out for a good walk. 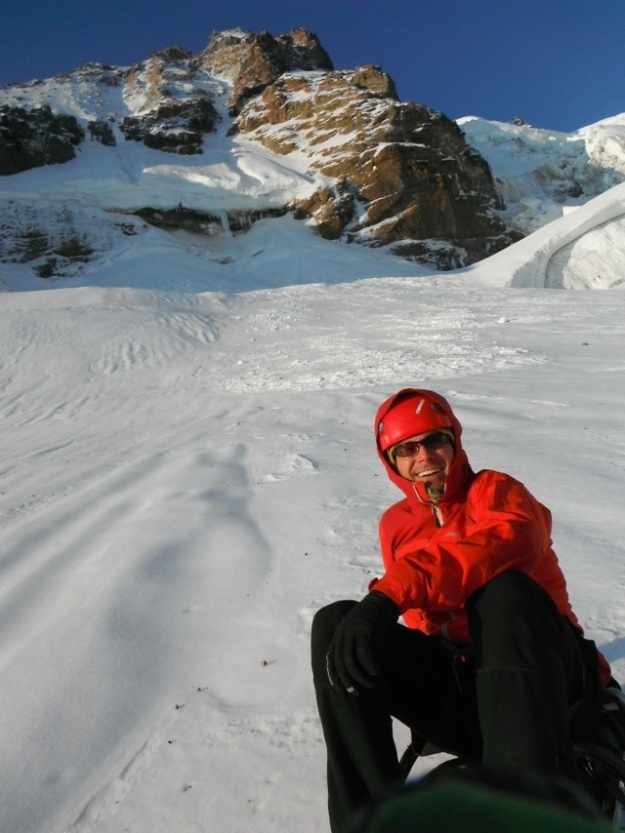 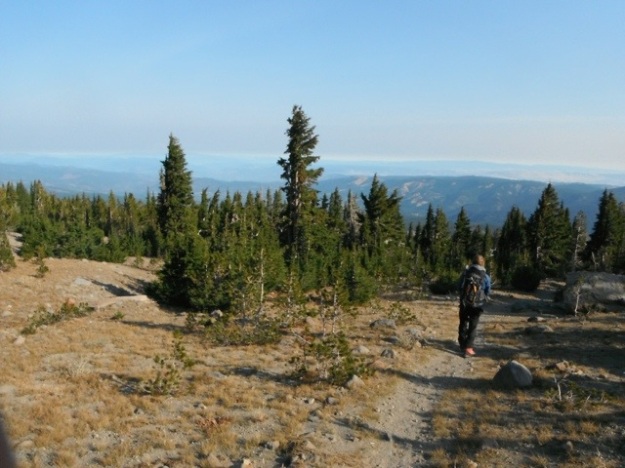