It was the first thing out of my mouth. I don’t know why- but the guy on the dock asked us for a team name and it just tumbled out. I’m not even sure I really know what a wafflestomper is, but one thing for sure, we were all ready to stomp some waffles at the end of this adventure.

I got to share a rope with two incredible people at one of the most incredible alpine crags anywhere this weekend. Ky and I have been trying to line up for weeks so this felt a little overdue- and I’ve been looking forward to sharing a rope with my friend Linda since we first met in May while she was in Missoula for work. We headed south to Stanley, Idaho on Friday afternoon with visions of pink granite on our minds, and forest fire smoke in our eyes. A little road construction meant we didn’t catch a boat across Redfish Lake until Saturday morning, but we didn’t mind the extra time to admire Linda’s sprinter van and pack far too much rock gear for the weekend.

I had been to the Elephant’s Perch once before and was eager to try some of the more interesting lines- especially with two other solid trad climbers. I wasn’t exactly sure how climbing as a team of 3 would work, but I was certain that I had the right people and we were headed for fun. By the time we finished the burly approach, and given that Linda had driven 1,200 miles to make the trip happen, she was happy to hold down camp while Ky and I wandered out for a few pitches on Saturday afternoon- “scouting” for Sunday.

We set off for the bottom of the “Astro Elephant” route with maximum enthusiasm and minimum intelligence. I hadn’t read the route description nearly well enough- but after 1hr 15min of wandering in the wrong direction, a nice couple with the guidebook set us on the right course, and we boogied to the base of the route. We made short work of getting off route on some of the stoutest 5.10 trad climbing I’ve ever experienced. 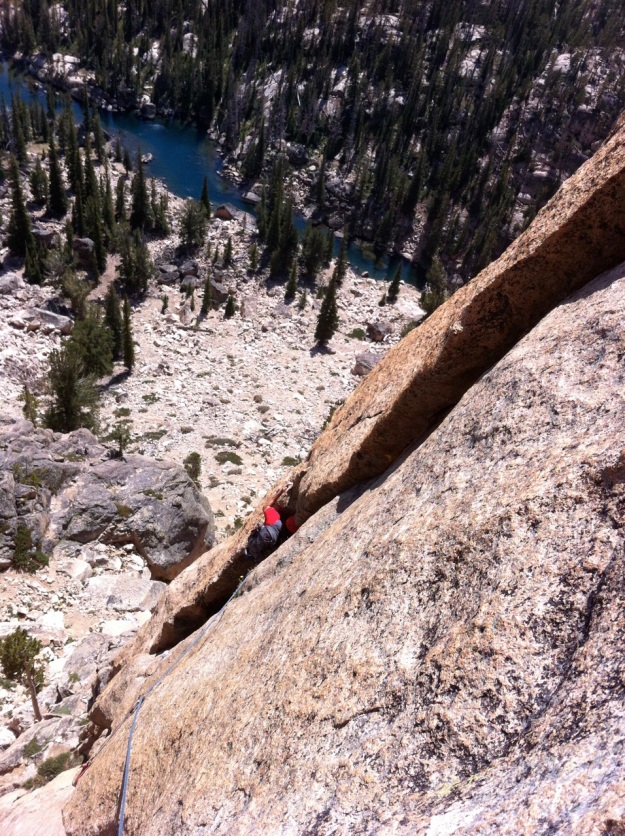 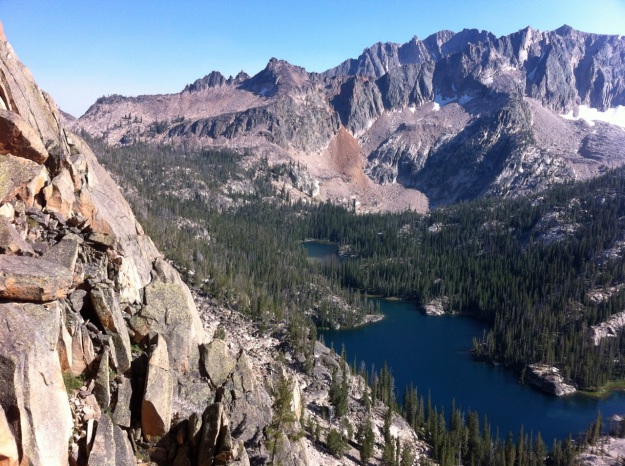 At least I found a pretty belay?

We had started with the intention to do the first 4 pitches, and then come back to fire the whole route Sunday. It didn’t quite work that way. As this was Ky’s first experience with real multi-pitch alpine climbing, he learned an important lesson “respect old school ratings.” We were thoroughly worked when we got back to camp, and quickly modified our plans, deciding to climb The Mountaineers Route as a team of 3.

I didn’t get many photos of the beginning of the route (cause I was leading it), but I had done the route two years ago so I felt a little more confident about what we were headed into Sunday. I enjoyed handing over the sharp end to Ky and Linda to enjoy the solid splitters and featured faces of fine pink granite that became our playground for the day. We knew we needed to catch the boat back across the lake at 7pm, but we put the focus on having fun and enjoying the route. The mission of having fun at least, was accomplished in full.

Ky finds his groove on the upper slabs of Pitch 5.

We climbed steadily, but swapping leads in a team of 3 demands careful rope management, and Ky was starting to deal with some unexpected intestinal problems, and our pace slowed. I was starting to bite my teeth as Linda worked her way through the pitch 7 crux: 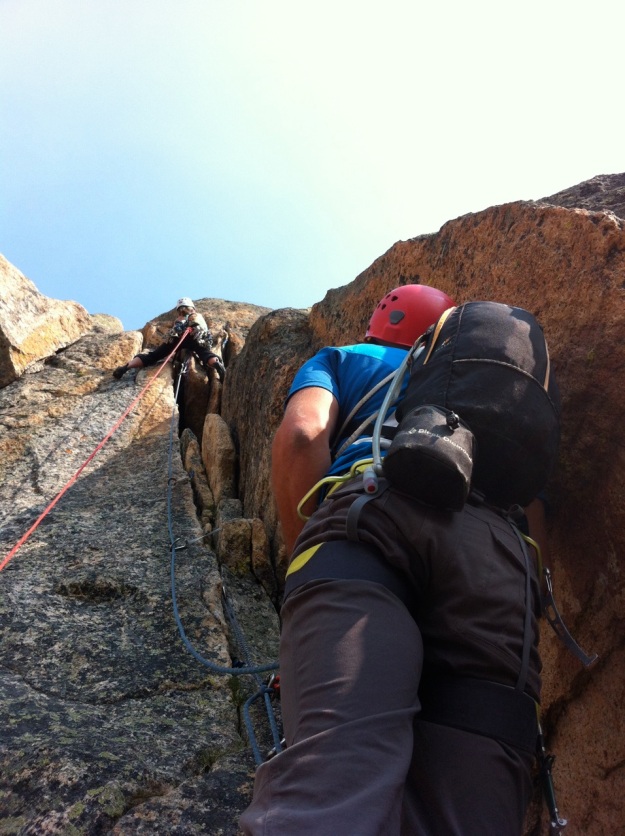 Charging the crux off-width means so much more when you are 5’1″… respect.

We topped out with the sinking realization there was no way we would make the 7pm boat back to the car, nor the 5 hour drive back to Missoula for work in the morning. We finished off some wild boar sausage (so good you should bother to click the link) and enjoyed the colors. 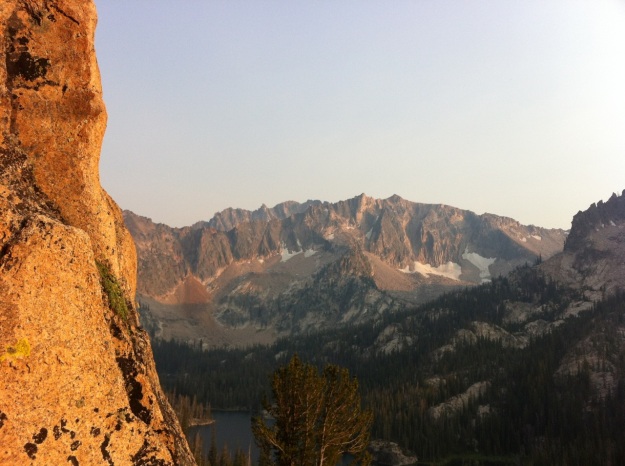 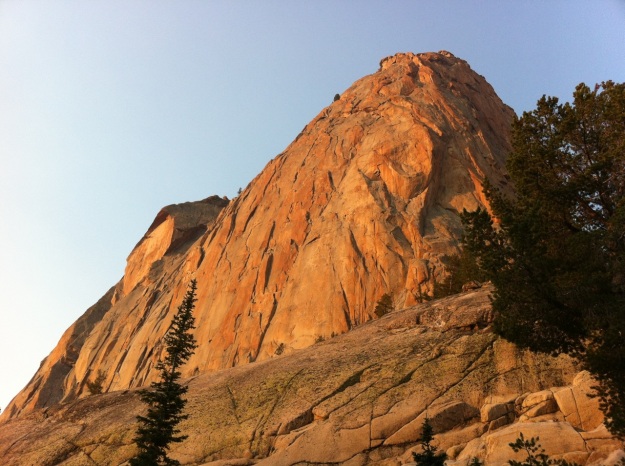 We moved as best we could. Ky continued to battle some serious health issues, Linda and I loaded up with weight, and we boogied down the valley in the dark. After being on the move for 13.5 hours, walking another 6 miles back to the car with our climbing packs was out of the question. We crashed on the beach and wondered what our apologies would sound like in the morning.

A shuttle boat showed up promptly at 8am, and we were in cell phone service by 830am, which was about 8 hours after Ky’s loved ones had called the local sheriff…

Significant others, bosses, clients were quickly phoned from Stanley and things worked out shortly. Ky and I quickly pointed north and Linda continued south- all of us with professional commitments on our minds.

So we spent an extra night out. No one got hurt, went hungry, or was ever in any real danger. We all missed a few hours of work, nothing else. I made some bad judgement calls, and perhaps volunteered our team for more than we could chew. We learned some stuff. That said, I don’t regret any of it, and am so grateful and so psyched to have shared such an beautiful weekend out with such beautiful people.