I’m here, my stuff is here, and my bike works, but after two days I still feel like I’m on a different planet. Perhaps it’s not knowing any of the language, or the general intensity that is any city of 7 million people, but this experience has been mixed with equal parts of excitement, apprehension and being totally overwhelmed. I’ve spent most of my time just biking- getting to know the city (somewhat), getting a feel for how differently people interact, and seeing a few sites. Couchsurfing has both landed me places to stay and English speakers to converse with, for which I am very grateful. I met another American through the site and we toured the national museum together yesterday afternoon. A couchsurfing meetup last night made for an evening of friendly conversation as well as a taste of the extensive bus network here (it’s not recommended for gringos, or anyone, to bike after dark).
So far I haven’t had any reason to fear for my safety, though the urban biking requires a very high level of concentration, courage, and bike handling skills. That said, there is an incredible network of bike lanes and overpasses that makes crossing the city quite doable, even on my first day here.
Juan, my first host, lives in a quiet area on the north side of town with good views of the city and surrounding mountains. I appreciate the relative calm after a day exploring the denser parts of the city. In many ways, Bogota is what I expected- dense, busy, smoggy, and cultured. The density is the most challenging part- in the 5000 square blocks I have traversed by a variety of routes, I have found nowhere that isn’t busy. In many ways being here is harder than I expected and I’ve thought of home quite a bit. Why did I spend my last few months of unemployment away from my friends? Why did I think I could take on a foreign country and language solo? Why did I choose to come here of all places? Amongst the folks I’ve met the gringos think my bike tour is awesome, and the locals think I’m loco. It doesn’t exactly inspire confidence. I’d be lying if I didn’t admit to doubting myself right now. It’d be easy to get back on the plane. I could justify giving up. But it would still be quitting. Don’t quit Skander, don’t quit.
I met a Brit named Richard at the meetup last night and he agreed to host me the next several nights. More importantly, he also knows a climbing spot outside the city and is willing to bike out there with me for the weekend. Neither of us have a rope, but he may know some others there and there is a hostel with the potential of meeting other folks as well. I don’t expect to have Internet there so hopefully there will be good stories when I get back on Sunday afternoon!
A few photos-

Me and the bike box at SFO

My host Juan and his Samoa pup, Yuki. 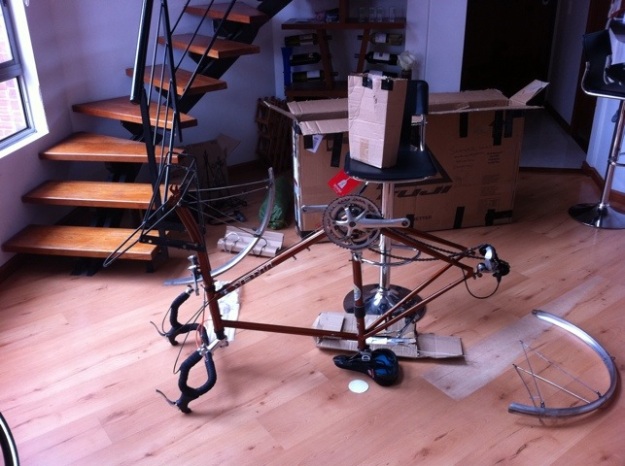 Getting the bike put back together.

Looking towards the south end of the city from downtown.

Looking across the north side from one of the many well placed bike overpasses.