For a small tribe of rock climbers in the Cascades, climbing the complete North Ridge of Mt. Stuart, in less than 24 hours, without sleeping (“car to car in a day”), represents something of “a standard”. Certainly not a noteworthy climbing achievement, but enough effort to warrant a little respect. 8 miles and 3,000ft of gain on the hike in, 3,000ft of rock climbing up to 5.9, some scrambling and route-finding down a steep snow couloir on the way out. For most recreational climbers, it’s a pretty full day.  If that doesn’t mean anything to you, just ride along for the photos.

I climbed Mt. Stuart via a different route in 2010. Our “car to car in a day” took 23hr30min, and was an eye opening experience in alpine snow and mixed climbing. I was grateful for strong partners, but was mostly just along for the ride with more experienced people.

Last year, Pat and I climbed the upper North Ridge, approaching via an overnight camp at Ingalls Lake, the Stuart glacier, and a snow gully that cut off a bunch of more technical rock climbing. We had a blast, and after a punishing descent, made it back to camp in 15hrs. The position of the route, the quality of the rock climbing, and the reputation amongst my friends made me think that doing the Complete North Ridge was fully warranted. Sometimes it’s fun to bite off a little more than you can chew.

(First look at the whole shebang)

Between weather and other commitments, I usually only get to partner with Ky one weekend a summer – so when we lined up for the July 8th weekend, I wasn’t going to waste the chance. Reliable beta indicated that the descent was in good condition.

We left the car at 315am and somehow managed to nail the approach- I was leading in my rock shoes at 715am. We let another party (Nick and Austin) pass us at the crux 3rd pitch because I wanted to take my time on the lead. I don’t regret it, but did cost us 45min. After the crux we lost a little more time with some route-finding, reaching the “halfway” notch at 11am. We were already low on water and while we rested and nursed a snowfield, the hoards caught up to us from below. I think there were 6 or 7 parties on the route that day. There are fewer possible variations higher on the route- so traffic management slowed us further.

It gets real at the Great Gendarme, and suddenly folks were more orderly in letting faster parties go. I blitzed the layback pitch (which I had followed in 2016), and Ky made excellent grunting noises while sending the off-width pitch on-sight. Both pitches are amazing climbing, but we were tired and I was really glad I didn’t have to lead the off-width. We raced for the summit, topping out at 645pm. I wish I could have enjoyed it without dreading the time of day on our descent.

(The only non-blurry summit photo I got of Ky. Instagram PC – Ky)

We gratefully followed Nick and Austin (because they knew where they were going), and found a legit snowfield water source just before really getting onto the snow downclimbing. Conditions were good, but I was very grateful to have aluminum crampons and approach shoes- we had to front point all the way down. We approached the bergschrund (where the glacier pulls away from the mountain) around 915pm, just as daylight started to fade in earnest. Steep snow was hardening, and our brains were fried from effort and dehydration. A safe path was not obvious, and it was not the time to be bold. We opted to give up on completing the sub24 hr standard, sit out for the night (with no bivy gear), and make a better decision in the morning. Nick and Austin agreed and we collectively found a nice little rock ledge to hang out on. 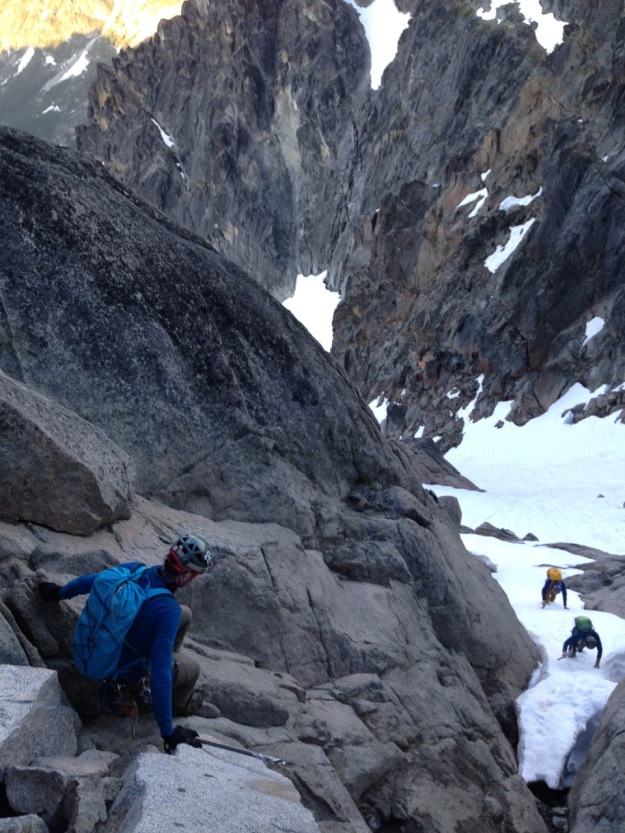 (Starting down the snow. PC Ky.)

After 5 hours of shivering, it was glorious to see the sun-rise. We warmed up for an hour, and left around 6am. Breakfast was a peanut butter packet and a fruit leather, the very last of our food. With daylight, the bergschrund crossing was more obvious and we were soon cruising towards the car.

(Ky finds salvation below the bergschrund)

I love mountains, even when it doesn’t all go according to plan. Thanks for following.

1 thought on “A Standard”